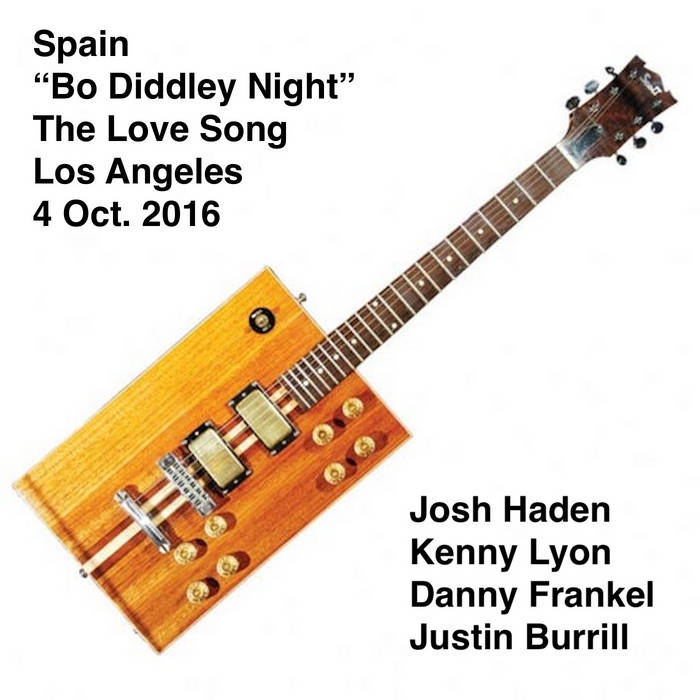 Set One:
Bo Diddley
Diddy Wah Diddy
Before You Accuse Me
I’m A Man

Set Two:
World Of Blue (In A Bo Diddley Style)
You Don’t Love Me (You Don’t Care)

Bo Diddley was born on December 30, 1928. He’s one of the most important originators of American popular music, if not the most important. I hear his guitar playing every day, no matter where I go or who I see.

On October 4, 2016, Spain organized a “Bo Diddley Night” at our residency at a little bar in Downtown L.A. named after a T.S. Eliot poem: The Love Song. In this edition, along with myself on bass and vocals, Kenny Lyon on guitar, and Danny Frankel on drums, we were joined by special guest Justin Burrill on guitar and harmonica. Justin is a L.A. music icon known for his work with the Wild Stares and Steve Gregoropoulos’ W.A.C.O. (See our August 23, 2016 Love Song recording: spaintheband.bandcamp.com/album/spain-love-song-los-angeles-ca-23-august-2016-with-justin-burrill-and-steve-gregoropoulos )

Pizza was purchased and drinks were downed. A celebratory mood was hanging over the bar, like a drunk over a bar stool. Present were the Gaylord contingent. David Brown of the band Brazzaville made an appearance in the audience.

We played versions of several Bo Diddley songs, as well as a Spain song played in the style of Bo Diddley. I’m not sure if we were successful in conjuring Bo’s spirit, but we certainly had fun trying!

All songs written by Bo Diddley except 2 written by Willie Dixon & Bo Diddley, 5 by Josh Haden, 6 by Willie Cobbs. 5 is published by Angel Heurtebise.