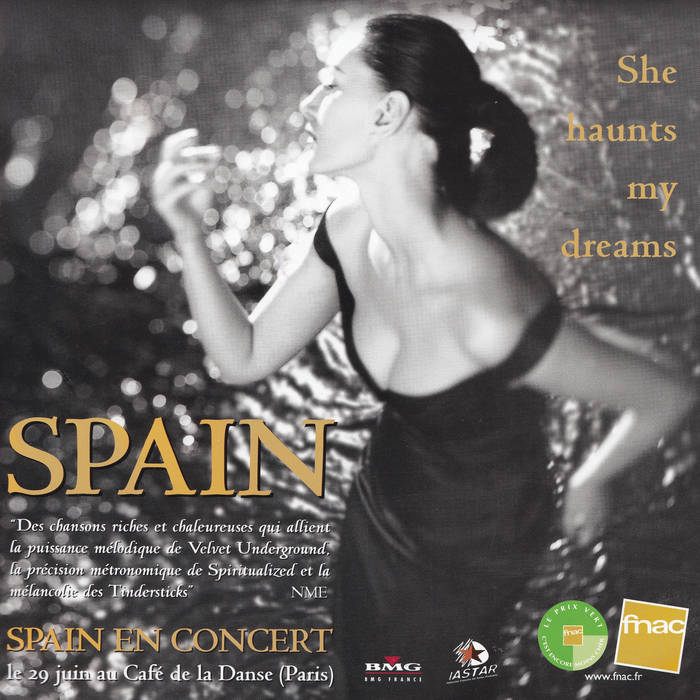 The 29 June 1999 Paris, France show occurred about half-way through the first leg of our European tour supporting our sophomore record, She Haunts My Dreams. Contractural problems had kept us from recording since the 1995 debut of our Blue Moods album, and we were eager to get back on the road. The band included myself and long time Spain guitarist Merlo Podlewski, L.A. multi-instrumentalist Shon Sullivan, drummer Will Hughes (formerly a member of the star-studded L.A ensemble Low & Sweet Orchestra), and Sweden’s guitar legend Björn Olsson (Soundtrack Of Our Lives). For another recording of a gig with this line-up, with much better sound quality, see spaintheband.bandcamp.com/album/spain-roskilde-festival-4-july-1999.

This tour holds lots of memories for me. I didn’t keep a tour diary (the way I do now), but I did find a copy of the itinerary, the page from which is printed here. Likewise, I couldn’t find any photos from this show, but I did dig up some photos and an interview that were published in France that month to promote She Haunts My Dreams and this gig. All are included here.

Special thanks to Jan Saghaug.